You may have seen posts on this ‘Mystery Blogger Award’ popping up in your feed; it’s basically an awesome shout out and works like this – a blogger nominates a number of their favourite bloggers and asks them to answer some questions they pose. In doing so, the recipient must then nominate some fellow bloggers and pay the Award forward. I was nominated by some pretty awesome sewing bloggers who asked some really interesting questions! An opportunity to thank them and pay the award forward, as well as answering their questions, meant no way could I pass this one by!

So, what is the award exactly?

“The Mystery Blogger Award is an award for amazing bloggers with ingenious posts. Their blog not only captivates, it inspires and motivates. They are one of the best out there, and they deserve every recognition they get. This award is also for bloggers who find fun and inspiration in blogging and they do it with so much love and passion.” Created by : Dkoto Enigma

What a lovely gesture! 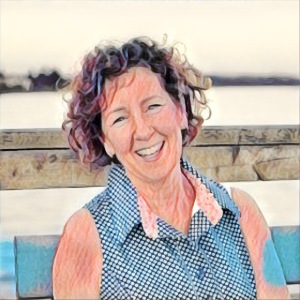 Firstly, I was nominated by the titian haired goddess that is Sue (A Colourful Canvas). I adore her blog, she’s an engaging writer and always has something interesting to say, and show, with her fabulous creations.

The questions Sue posed are:

I’m always interested in what’s happening in the kitchen. Do you cook and, if so, what’s your favourite dish to make?

I do, mostly out of necessity, but every now and again I get a real urge to get in the kitchen and cook up a storm; I’m told I bang about like crazy and unreasonably use every single utensil there is! I’m currently writing a book of Home recipes that I can give to my children when they’re older. Mmmm, my favourite dish to make is probably anything to do with pasta; when I’m in the mood I’ll make it fresh – cannelloni or lasagna if I’ve hours to spare or linguine with seafood and chilli if I’ve not. 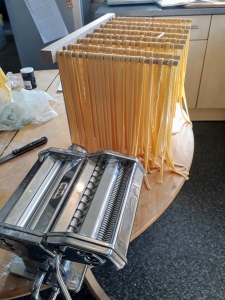 What is your most memorable sewing project?

Probably only ones in recent memory because my memory is so bad, haha! But honestly, my first ever make – which was an unwearable disaster – counts as the most memorable, simply because it was the first time I’d ‘failed’ at something yet felt totally elated. To be inspired by ‘failure’ was a revelation.

If you were challenged with sewing only 5 patterns for an entire year (don’t worry it’ll never happen) what Patterns would you choose?

You know, that wouldn’t scare me too much. I could quite easily sew five patterns over and over again! They’d have to be wardrobe staples I guess so I’m picking the Piccadilly PJs, the Cheyenne and the Halifax Hoodie. My daughter would never forgive me if I didn’t add her beloved Rosetta dress to the mix; I’ve made two for my daughter this summer and they’ve been a huge hit with her! I’d also like a couple more Luzerne Trench coats!!

What are your must have sewing tools?

Are you kidding me?! ALL THE TOOLS! I’m a total geek for collecting sewing gadgets and I’m forever posting my latest discovery to my Instagram feed.

If you were offered an all-expenses paid holiday anywhere in the world, where would you go?

At the moment, I’d say Iceland; a place for which I have a really strong literary lust. I think it would be a great place to just … breathe.

I was also nominated by the fabulous diva (in the best sense if the word!) that is Hila (A Saturday Night Stitch). This Wonder Woman is such an inspiration with her fantastic sense of style and flair for fashion drama! Her questions are:

What song will always get you on a dance floor…

Pretty much any…I really don’t really need an excuse; just clear me a space! I’m an introvert everywhere except the dance floor!

See above. That said, if I lived alone I would NEVER cook apart from something I’ve routinely knocked together for myself since I was a teenager; rice with malt vinegar, ketchup and mayonnaise. Yeah, I’d probably live on that. With a side order of Jelly Babies maybe.

Your proudest moment was…

The birth of my two children.

Crimson. Or, to wear, Navy, closely followed by all the Autumnal, earthy colours..

Your best dance move is…

Best!? I don’t worry about that. I just dance! 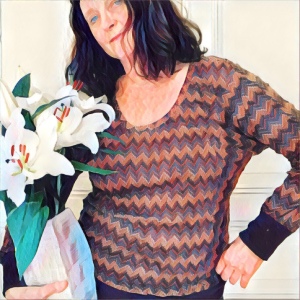 The lovely Creative that is Wis (What I Sew) also kindly nominated me. Wis lives in a beautiful part of the world and her environment is reflected in her makes; you just know the desire to create runs through her very veins.

What was the first thing you ever sewed?

That was the disaster I talked about above. ….l did eventually cut it up to make something else … which also got scrapped!

What was your favourite garment to dress up in when you were little?

Two things immediately spring to mind; a Bee costume my Mother made for me when I was about 4 and a dress I first wore my 9th Christmas; it was a really sumptuous ladylike dress and I felt very ‘Victorian’ in it…it may have even had underskirts…I had a strong sense, when I was young, that I was born in the wrong era!

What is the strangest thing you’ve ever had under your presser foot?

I still occasionally find myself pondering the strangeness that I ever have anything under my presser foot…that I sew at all. Other than that, I’d say…my finger...ouch!

Where is the furthest you’ve travelled?

I’ve no idea; my sense of distance and geography is soooooooo bad…without Googling the distances, I’d have to say either North Africa or San Francisco????

What is the funniest movie you have ever seen?

I don’t know about the funniest movie I’ve ever seen…but one of the funniest scenes immediately springs to mind…the movie is ‘The Money Pit‘ with Tom Hanks and Shelley Long. I’m certainly not saying it’s the greatest, or even funniest, movie … but that scene where the bathtub drops through the floor and Tom Hanks’ character breaks out into hysterical laughter just cracks me up! 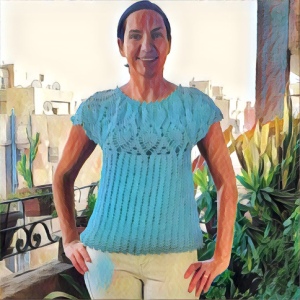 And finally, by no means leastly, I was nominated by Maria (Hello…I’m Your New Neigbor) a fascinating and talented woman who has been blogging forever!

Why did you start sewing?

To fulfil a long-held, unacknowledged desire whilst simultaneously saving my sanity.

What is your favourite me-made garment?

Always the last thing I made … and the next thing I’m going to make.

I guess the temptation here is to say something exotic, to showcase your travels. But, truthfully, I love Wales and parts of Yorkshire. Right now I’d say Abaereron in Wales…

Have you ever won a challenge / giveaway and what did you win?

I have! I won 2nd prize in the fancy dress competition my Mother made the Bee costume for…and I won a mini sewing machine from the Dressmaking Blogging Network.

How would you react if someone you’ve never seen before walks up to you in the street, happily calls you by name and gives you a hug?

It happens!!! I have mild ‘facial dyslexia’ and really struggle to recognise people I know out of context.

I’m deaf. But I can hear you! I’ve deliberated a looooong time about whether to ever mention this properly. I had a meningococcal type infection in my late teens which resulted in the loss of my hearing. I had an operation done about 10 yrs ago to fix an adapter to my skull bone which transmits sounds directly to my brain…the latest version means I also have Bluetooth connection, which is incredible…I like to think I’m part cyborg! I don’t always switch it on; my husband snores and the kids can be loud!! I’m also a pretty good lip reader. I don’t always get it right…sometimes I get it hilariously wrong, sometimes embarrassingly so – it’s hard to distinguish between what I hear, what I ‘read’ and what my brain interprets…so I can struggle in noisy/social environments. But other than that, I quite like being able to turn sound off!

Before having kids I was a serious about my academic studies and rather political. I was asked to stand as my local Councillor just after the birth of my eldest; I turned it down. 16 years later and I’ve just been asked to put myself forward as a candidate again…I’m torn.

I have to have a book on the go…otherwise I feel cast adrift; unhinged. Just knowing the book is there is enough; to be picked up and retreated into at will.

Now time to pay it forward. The rules are :

My Nominees Are a bunch of crazily talented and inspiring Sewists:

Becks I Sew Therefore I Am

My Questions for them Are:

By all means, tag yourself!

Until next time, as always, thanks for reading x 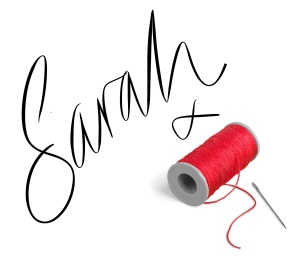 17 thoughts on “The Mystery Blogger Award : Your Questions Answered!” 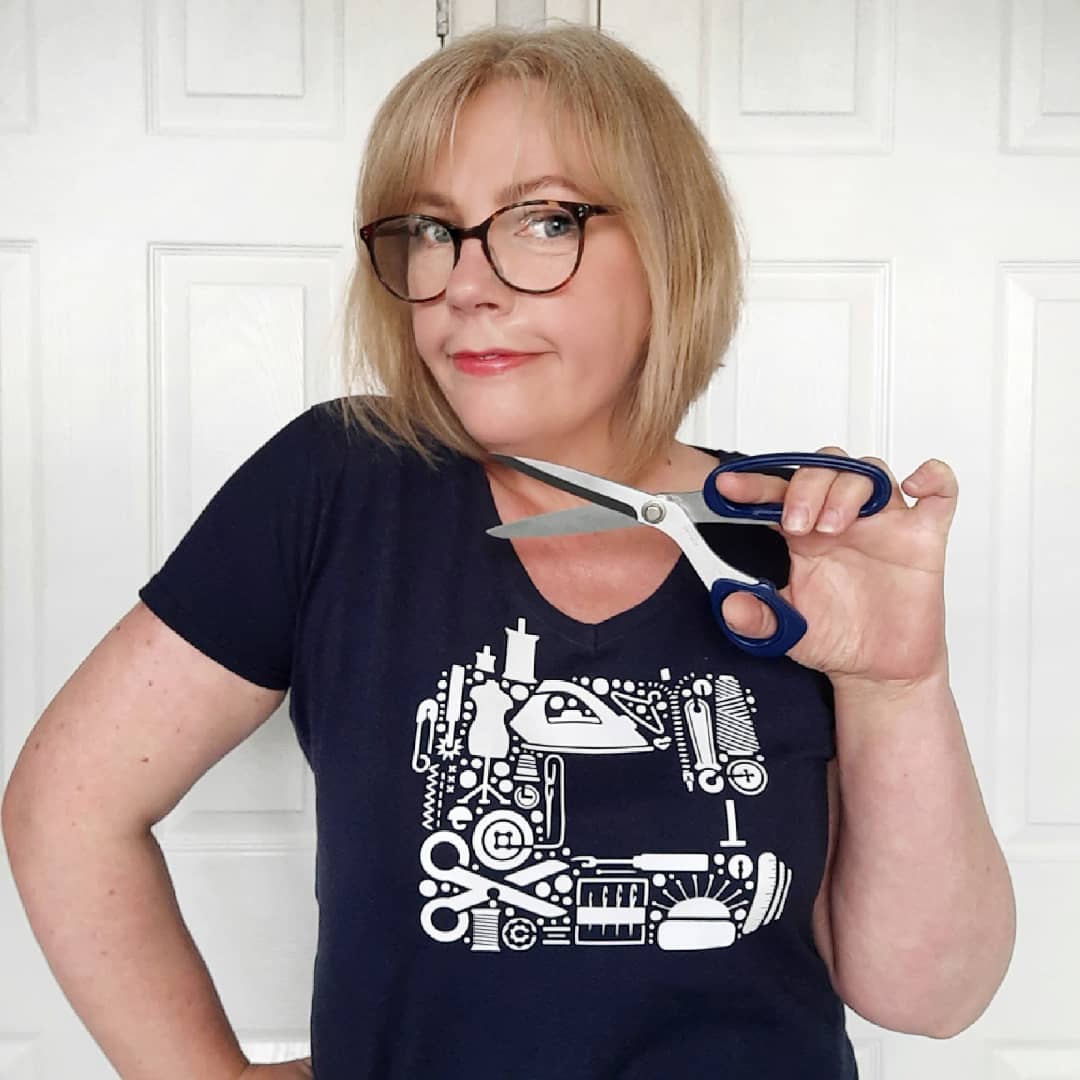 Pleased to meet you!

Hi, I’m Sarah…thanks for stopping by. Here I aim to document my sewing journey; the greats, the just wearable and – lets be real – the absolute fails; sharing whatever I learn along the way here, with you.

You can find out more about me by selecting About Me/Contact Me from the main menu or choosing ‘All Sewn Up’ from the Categories menu.

Looking for something in particular? Search here:

Find me on the Minerva Makers Social Platform! 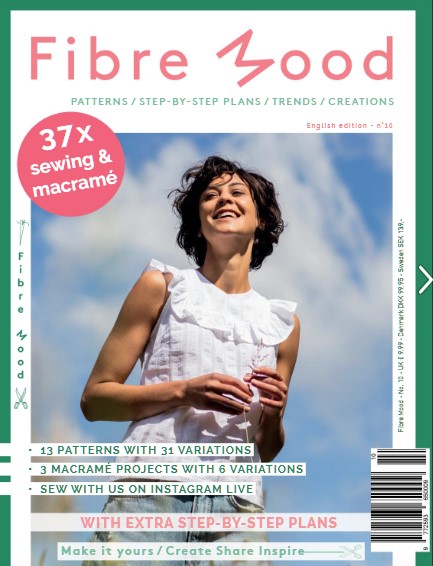 My most loved sewing tools, gadgets and more!